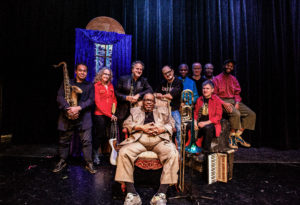 An unprecedented collaboration between three cultural visionaries: DAVID KRAKAUER, champion of klezmer music and world-class clarinetist; legendary funk trombonist and arranger FRED WESLEY, celebrated for his work with James Brown and George Clinton; and hip-hop renegade and beat architect SOCALLED – Abraham Inc. heralds a time when boundaries are eroding, mutual respect is presumed, and musical traditions can hit with full force without concession or appropriation. Backed by a three-piece horn section led by Wesley, plus musicians who collaborate frequently with Krakauer and Socalled – and the result is an all-out klezmer-funk dance party!

Says Krakauer, “Ever since I formed Klezmer Madness! in the mid 1990’s I’ve been exploring the possibilities of adding funk, jazz, and lately hip-hop influences to klezmer… These explorations logically led me to my collaboration with Socalled, a kindred spirit in the search for that magic place where these styles can find a commonality of ecstatic trance.

“In late 2005, Socalled and I were on tour somewhere in Europe when [Klezmer Madness!] drummer Michael Sarin mentioned to Socalled that a friend of his was playing with Fred Wesley. A lightbulb went off in our heads… I got in touch with Fred and we met up in New York – at the Carnegie Deli, where we had matzoh ball soup – and decided to try playing together… We booked a rehearsal studio, not quite sure what was going to happen. Fred and I improvised together on a beat by Socalled, and at the end of it we all said to each other, ‘Wow, this totally works!’”

Says Wesley, “I think we came up with a killer product. It is a pleasure doing something different with such dynamic musicians as Josh and David. Our talents were stretched to areas that we couldn’t have imagined reaching alone. We all inspired one another.”

As Socalled sees it, Abraham Inc. is about “bringing people together with music, celebrating differences and commonalities… Cultural hybrid vigour in yo’face.”