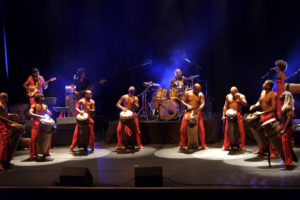 Under the direction of Emile Biayenda

These ‘drums of Brazza’ resound with the rhythms of the various Congolese ethnic groups, to which they have added influences from resolutely modern drummers. They encompass the rites of Africa and the joys and wrenches of its peoples. These drums talk to us, sing to us and send us back to the times when the great drum, the ancestor of all percussion, was the companion of a whole continent. Magicians of rhythm and body, Les Tambours de Brazza tie again with ancestral gestures and rites. Yet these musicians are not traditional artists. Current music forms are very present in their work, which nods towards rap and reggae. Their complete, modern stage performances have asserted the drum as a full-fledged instrument that defies time.

Sounds spurt out of their drums, rhythms settle in as vital pulsation, dances invent new languages based on traditional steps and colourful costumes brighten up the stage. With their songs and their irresistible cheerfulness, these griots of the modern times pass on a universal message of peace, freedom and brotherhood.The band is based in France since 1990.